In the late afternoon of July 17, 2018, the three-alarm Peninger Fire began and burned roughly 123 acres of land in the heart of Central Point. The fire burned land along the well-known Bear Creek Greenway, threatened 100’s of nearby homes, evacuated 1000’s of residents, and closed a portion of East Pine Street for numerous hours as fire officials gained control of the fast-moving wildfire. Due to the nature and location of this fire, it was important that local natural resources managers come together to turn the attention into positive action rather than fear and misunderstanding.

Prior to the fire, A large portion of this area was a dense colony of Himalayan blackberry, poison hemlock and other invasive plants.  Since the fire, ODOT, Jackson County Fire District 3, City of Central Point, Jackson Soil and Water Conservation District and Jackson County, have taken measures to minimize erosion, control invasive plants and use the area as a location that can provide a public learning opportunity.  The Natural Resources Department of the Rogue Valley Council of Governments provided overall project coordination.

This project involves collaboration with several partners on the restoration of the Peninger Fire, the Crater Land Lab, and the Expo Center areas. For the 2018 – 2019 fiscal year, the following activities have been completed:

To be completed during the 2019 – 2020 fiscal year are the following activities:

The photos above show staff from Lomakatsi planting native species at the restoration site. 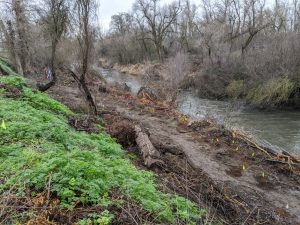 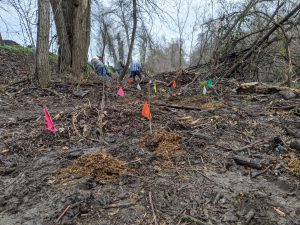 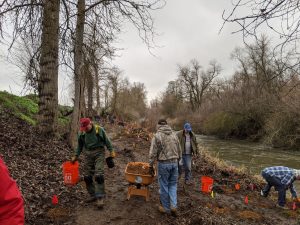 The site behind the Jackson County Expo Center was previously overtaken by poison hemlock and Himalayan blackberry. To reduce fire risk in the area and to encourage native plant growth, these invasive species have been addressed through mechanical removal and will be subjected to spot spraying.

The scope of this project also includes the following tasks:

The photos above show members from the Middle Rogue Steelheaders and staff from the Nature Conservancy, Jackson Soil and Water Conservation District, and the Rogue Valley Council Governments planting native species at the restoration site.